Cheer’s Team Navarro just won the 2022 National Collegiate Cheer and Dance Championships, and they are celebrating hardcore. Fans fell in love with Team Navarro when Cheer first debuted back in January 2020. The docuseries followed the team and gave the world insight into the dangerous and riveting world of competitive cheerleading. Throughout the series, fans got invested in Navarro coach Monica Aldama and her loveable cast of characters. The show highlighted the way injuries affected their ultimate goal of competing at Daytona’s National Championships and also showcased the way in which cheer has positively impacted the team. Giving them a way to express themselves and excel at something, it allowed them to steer clear of the potentially negative influences they were surrounded by.

Thankfully, Cheer ended in a resounding win for the viewers as well as Team Navarro. The series propelled Monica and her most popular competitors into the spotlight. However, during this time–and as they were training for their next competition–allegations of child pornography and abuse surfaced against one of their most beloved team members, Jerry Harris. The show had been in the process of filming its next season when it all happened. Cheer 2 followed Monica and her team, as well as the competing team Trinity Valley, as they trained for the next championship. But then it was heavily derailed once the allegations and charges surfaced. Nearly a year-and-a-half since the news came out, but Team Navarro seems to be doing better and is stronger than ever. 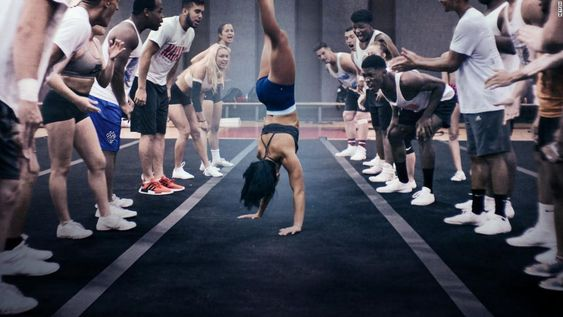 Various team members took to Instagram to announce that Team Navarro had won their 2022 Daytona National Championships. The official Navarro College Instagram page posted a picture of the entire team in their uniforms in front of a trophy with the caption, “Congratulations to our Dawgs! National Champions.” The post was decorated with emojis showcasing Team Navarro’s excellent score of 99.2. Teammate Irelyn Brady posted a picture of herself in uniform in front of the trophy with a lengthy caption that stated just how grateful she was to Monica, saying, “Monica, I never would’ve thought I would be where I am today. Thank you for seeing the potential in me. Thank you for keeping my chin up when it was hard. Thank you for loving me and this program, unconditionally.”

Since the championships take place on a beach, it’s tradition for Team Navarro to run into the ocean, uniforms and all, to celebrate if they win. Luckily for them, this was a good year. Flyer Maddy Brum shared images of the team celebrating in the water, as well as one with just her and Coach Monica drenched, with the caption, “‘You finally got a ring with Navarro Maddy Brum.’ 2022 Grand Collegiate National Champions! @monicaaldama WE DID IT QUEEN.” Monica commented on the post, “WE DID IT!!!!! I love you so much!” As for any posts from Monica herself, she shared images on her Instagram Stories of the team winning but has yet to post anything of her own.

While the win is huge news and the celebration certainly is warranted, fans are a bit concerned. Cheer has already been greenlit for a third season, with an expected release year of at least 2023. If that’s true, it will most likely follow this championship, meaning fans will already know the ending to the season. Obviously, it’s understandable that the college, and the team at large, would want to publish this news as soon as it happens. However, it’s uncertain as to what this will mean for the hit Netflix show, though true fans will want to watch just to see how Team Navarro bounced back so graciously. Why Confidence Is Important In Young Athletes